This morning I awoke to the gentle rocking of the Texas Eagle Amtrak train. Opening the curtains in my ‘roomette’ I saw a cartoonish landscape of arid desert, only interrupted by the occasional three-pronged cactus and hazy mountains in the distance, towards the Mexican border.

Amtrak – the US’s national intercity rail system – seems to be America’s best-kept secret. Everybody I’ve mentioned my travel plans to has expressed surprise that it’s possible to take a train from LA to Texas, let alone knowing about the network that stretches from coast to coast and border to border, covering 46 of the 50 states.

And somehow, when every other interaction with public services in this country screams of underinvestment and over-bureaucracy, the US have managed to maintain a railway network that is comfortable, affordable and even retains the romance of the great railway journeys of another era.

From stepping into the art deco splendour of Los Angeles’ Union station to the lounges and dining cars of the train itself, this is the continental equivalent of crossing the Atlantic on an ocean liner. It’s much slower than flying (it took all night for the train to cross California), but the reward for this patience is days and nights of gently transitioning vistas. 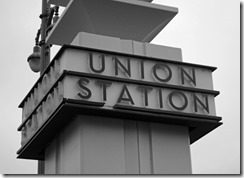 In short, this is exactly how to travel across the US if you have a free month which, as luck would have it, is exactly the situation I find myself in.

On Saturday morning I took the Greyhound bus from San Francisco to Los Angeles. The eight hour journey was interrupted only briefly by a rest stop in the central valley, at which the temperature was a full 15°C hotter than it was in SF. Northern California is roughly at the same latitude as north Africa, but the geography of the San Francisco bay leads to a microclimate that is much cooler than it ought to be.

I was in LA to catch a thrice-weekly train on Sunday evening and had considered going down a day earlier, but couldn’t figure out what I would do for two full days. I wasn’t going to make a solo trip to Disneyland or Universal Studios and I have no interest in riding a bus past the empty homes of movie stars I’ve never heard of.

Los Angeles is huge and almost impossible to navigate without a car. I took a Lyft to my AirBnB in the Glendale/Silverlake neighbourhood, then set out on foot in search of somewhere to eat. I walked along the Los Angeles river, which better resembled a storm drain, passed under a freeway and then found a bleak parade of shops and restaurants. According to Google, the most popular eatery for locals is the Red Lion: a pub which, in spite of its name, insists that it is actually German. I ordered a Lyft to Hollywood.

I didn’t know very much about Hollywood the neighbourhood (as opposed to the media shorthand for the movie industry). It broadly consists of two long boulevards – Hollywood and Sunset – populated by an incongruous mix of glamour, tat and sleaze. The Hollywood Walk of Fame meanders around the sidewalks, representing the stars of movies, television and music with literal stars embedded into the ground.

I went to a burger restaurant for dinner, eating an Impossible Burger. This is a vegetarian patty made somehow to taste almost exactly like actual beef. It’s only available in California at the moment, but was really quite impressive; not *quite* the same as beef, but a decent imposter.

I woke early on Sunday morning and took a Lyft up to Griffith Observatory. Apart from being an interesting science museum, there are also spectacular views across the city and my first sight of the Hollywood sign.

The observatory itself was closed, so I decided to follow the four mile hike across to the Hollywood sign. It was built in the 1920s as a promotional stunt for the Hollywoodland housing development below it, but became such a landmark that it became a permanent feature, eventually being shortened to ‘Hollywood’.

Once I’d got as close as I could to the sign without breaking any laws, I took the obligatory selfies and decided to walk back down the hill via the Hollywoodland residential area. This took a lot longer than expected because the roads twist and wind back and around themselves. The houses were architecturally diverse and more modest than I would’ve expected; these were not MTV Cribs.

Eventually I reached Hollywood, immediately remembered how unimpressed I had been the previous evening and summoned a Lyft to drive me to Santa Monica.

For some reason, I had pictured Santa Monica as a classy seaside resort with a nice boardwalk and elegant hotels. It is not like this. It has a pier with a Bubba Gump’s and a series of burger shacks, each claiming to be the last burger on land before being contradicted by an even more westerly burger shack. The pier was teeming with lardy tattooed tourists stuffing their faces with burgers, fries and waffles. I looked on with disapproval, then went for a McDonalds and an ice cream.

A crowd formed at the end of the pier, applauding and recording something below them. A man, accompanied by a violinist, had just proposed next to the Bubba Gump’s. She said yes.

I walked along to Venice beach, which was tacky in a different way, the boardwalk lined with street performers of limited talent. I dipped my feet into the Pacific to symbolically mark the start of my coast-to-coast adventure, then raised the Earth’s albedo a notch by sunning my pasty white chest for an hour. It is now red and sore.

Unable to take any more direct sunlight, and still with several hours until my train, I took yet another Lyft, this time to Little Tokyo, which is adjacent to Union station. The distance between Venice beach and downtown LA – 15 miles – is more than double the width of San Francisco. LA is just annoyingly big and everything is way too spread out.

Little Tokyo, though, was excellent. The international school job hunt that culminated in me moving to San Francisco last year was inspired by an excellent holiday to Japan in 2015. Little Tokyo is a microcosm of the food, the culture and the crazy of Japan.

I ate an exquisite bowl of assorted sashimi (raw fish) in a hotel restaurant, then popped into a bar down the street where happy hour pints of Asahi were only $3. I sat at the bar, occupied entirely by Japanese people speaking Japanese. I chatted to a man called Shin about my travels in Japan and met an elderly man called Yoshi who described himself as a teacher of ‘female performance’; this turned out to be a euphemism for drag queens.

Three pints later, I said my arigatos then walked to Union station (at last, somewhere in LA that is walking distance from somewhere else) and climbed aboard a massive double decker train. I found my roomette – a tiny cabin with two seats that fold together to make a bed – and settled in for the 30 hour journey to San Antonio.