Despite San Francisco being famously hilly, it has excellent cycle infrastructure, including a route known as ‘The Wiggle’ that eases westbound cyclists home by avoiding the steepest inclines. This afternoon, as my Brompton and I struggled up the final gentle climb of The Wiggle, an overtaking cyclist shouted “You do know it’s flat, right?” to me as he sped past. 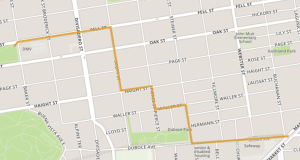 Naturally, I was rather annoyed by this breach in cycling etiquette. How dare he cast aspersions on my lack of uphill fitness? It may not have been L’Alpe d’Huez, but it certainly wasn’t flat and it came at the end of a series of tiring hills at the end of a busy week. Who was he to judge? Etc.

I continued to stew about this for a minute or two, before my brain caught up and realised what you probably guessed about a paragraph ago: he wasn’t referring to the road, but to my punctured rear tyre. What I had assumed to be an act of cruelty was actually one of kindness, and I rightly felt bad about the less-than-gracious face I had pulled at this courteous stranger.

The point of me telling you this story about a single word that has two meanings is to facilitate a segue (or, if you’re hipster enough, a Segway) into a discussion of single meanings that have two words associated with them. Yes, that’s right, it’s time for the Brit-in-the-USA moan about American English.

Google tells me that it was George Bernard Shaw who first described England and America as “two countries divided by a common language”. This is quickly obvious to British tourists here, as they begin their vacation by unloading the trunk of their automobile onto the sidewalk. It gets more tricky once you start to live and work here.

Last week I moved into a studio in the Sunset district. Like a Thatcherite theme park, over here you have to pay a private company to collect your bins every week and to set this up you have to call the company and request the service. For a Brit fresh off the boat, this call resembles a one-sided game of Taboo, in which the words “bin” and “rubbish” are forbidden, but you also worry that they might think you’re taking the piss if you say “trash can” in an English accent.

But by far the hardest linguistic adjustment I’ve had to make is starting work as a teacher in a US high school. The US system appears to be mercifully free of the never ending catalogue of acronyms that have taken over British education (“Here’s a WAGOLL of some DIRT completed by an SEND student with EBD, ASD and a little ADHD. Is this A* student G, T, G&T or MA? Pass my G&T.”) However, there’s still plenty of room for confusion.

So, on the off-chance that this blog is ever read by a teacher who happens to be transferring from the UK to the US (or vice versa), here is my guide:

UK: University
US: School or college

…and I haven’t even considered the French terminology that is freely used at my school.

Anyway, returning to my opening story, I had to take my bike on the bus the rest of the way home to my ground floor flat or, as it’s known here, my first floor apartment. Given I can’t cope with two meanings of ‘flat’, it’s probably for the best they’ve got a separate word to describe my home.